Over the past few weeks, you have seen the importance of holding the pen at an angle and practicing how to exert pressure to achieve those thin strokes in brush calligraphy.

But you might still struggle with the fact that your thin strokes do not exactly resemble a hairline.

In fact, you may be complaining that your thin strokes are shaky, and too thick, and inconsistent in size.

Well, I’m here to tell you that your focus should not be on the hairline. At least not in the beginning.

Quitting My obsession with the hairline

When you are first beginning to learn and write brush calligraphy, it is easy to become obsessed with getting the thinnest upstrokes possible.

I know because I was obsessed myself.

I was so obsessed in the beginning, that I threw my first Tombow brush pen into a box and didn’t pick it back up until weeks later. Seeing other brush calligraphers achieve such fine lines and ultra thin strokes made me want to strive for that standard, and only that standard. Anything less than a hairline must mean that I was doing something wrong. I blamed the pen, my hand, and the fact that this (brush calligraphy) wasn’t even real calligraphy (I’ll tell you more about that in another post).

But then something clicked.

I opened back up to the idea of brush calligraphy, retrieved my brush pen, and began to write. Still frustrated that I couldn’t achieve the hairline, I wrote anyway and just kept on writing.

Here is when things clicked: I stopped obsessing over the hairline, and instead I focused on getting to know my brush pen really well.

Once I saw my pen’s “minimum” and “maximum” stroke width, I accepted that my writing would ONLY fall in between that measurement. It was when I changed my mindset from achieving an ideal to embracing the nature of my brush pen that I began to find progress.

Not all brush pens were created equal

Take a look at two of my favorite brush pens. The Tombow dual brush pen has a thick tip:

The Tombow Fudenosuke Soft Tip is a bit thinner: 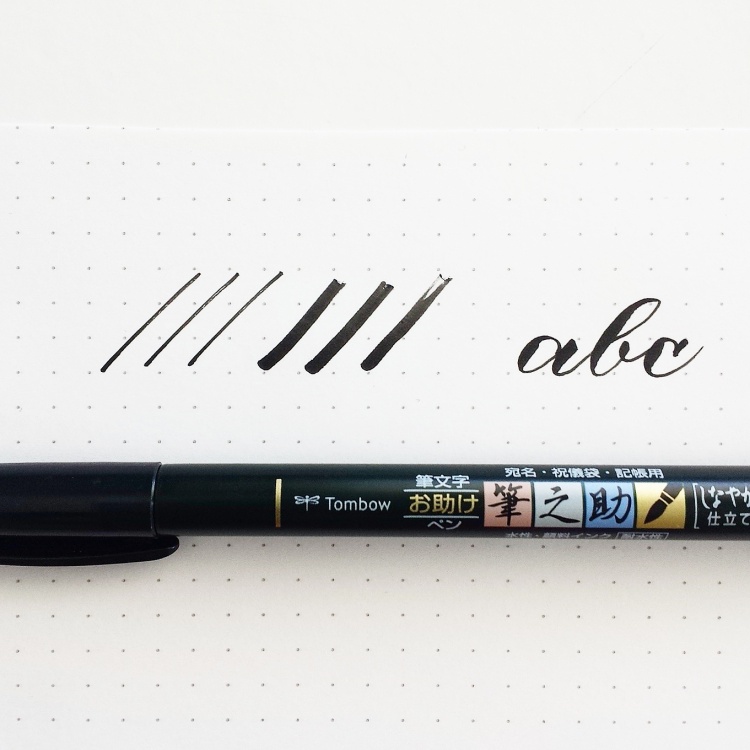 This does not mean it is impossible to create similar strokes, but there is definitely a difference. In fact, the thin strokes above for each pen look similar. But their thickest width varies greatly, and that plays a part in the overall width of your strokes.

Why you should keep writing, even if you cannot achieve the hairline

If you are still holding onto the ideal of a hairline upstroke, try to loosen your grip (pun intended). What I mean is, give yourself a break. Let go of your desire to achieve the hairline stroke – because trust me, it WILL come and we will talk about how in a future post.

Instead, get to know your pen, learn how it writes, and focus instead on being consistent in your letterforms. You can read more on brush calligraphy drills here.

It is much more important to build the muscle memory for the proper letterforms, than to achieve the thinnest upstrokes.

Are you obsessed with achieving the thin upstroke?

What is something you are struggling with when creating brush calligraphy?

P. P. S. Be sure you are subscribed to my blog below so you don’t miss a post!

18 thoughts on “The reason you should focus on the thin stroke, but not the hairline”